​This DVD has Seven early Universal Shorts starring Eddie Lyons and Lee Moran with Victoria Forde and Edith Roberts.  Lyons and Moran made over 300 silent comedies for Universal with a variety of female co-stars.  Victoria Forde (the future Mrs. Tom Mix) and Edith Roberts made the most with them but others included Priscilla Dean, Betty Compson, and Ramona Langley.
Included in this set is one of the earliest studio tours.  Universal opened up their studio to tours in March 1915.  Behind the Screen was released in July.  Unfortunately only the first reel survives but it shows Universal as it existed at the beginning, the outdoor stage, Prop Department, Scenario, and Wardrobe Departments, The Actors bungalows and you get to see the beginning of a movie as it is filmed with Eddie, Lee and Victoria.  Also Director Al Christie is prominently featured.

Pruning The Movies is a fun jab at censorship

A Peach and a Pair have Eddie and Lee racing each other to be the first to reach Victoria.

The Lost Appetite has Lee Moran eating Eddie and Edith out of house and home as well as the local diner.

Detective, Dan Cupid has Eddie stealing a necklace from Victoria and Lee as the detective trying to recover it.

Her Rustic Hero,  Victoria tries to find a Mountaineer to base a story on and mistakes Eddie for the real thing

What A Clue Will Do has Lee as a famous detective and Eddie as his sidekick trying to track down a lost child.  Edith is a newspaper reporter on the same case.

Each of these films was copied from the Library of Congress except for The Lost Appetite which comes from my personal nitrate film collection. David Drazin has scored Lost Appetite, Detective, Dan Cupid, Her Rustic Hero, and What a Clue Can Do.   On the other three I have added a royalty free soundtrack. 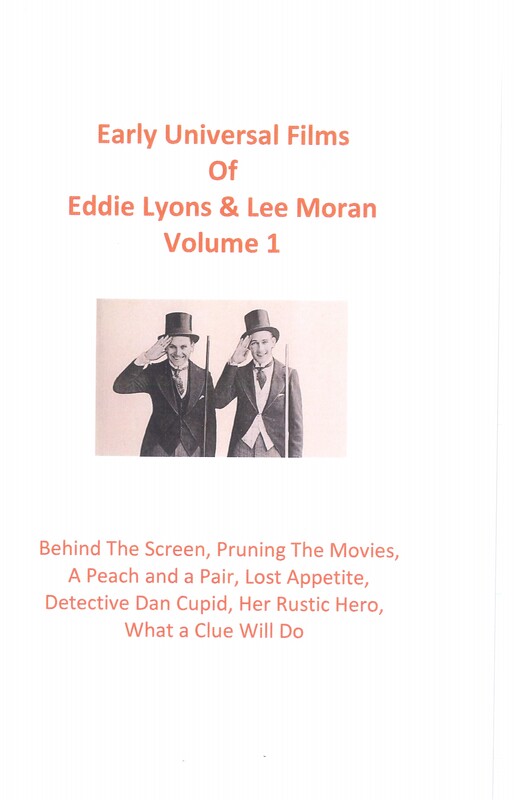